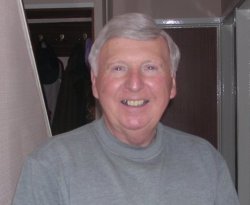 Dave joined St Albans City and British Legion Band in 1947, aged 10. His father, Archie MacDonald had joined when the family moved up from Plymouth in 1945 and the young Dave soon followed in his father’s footsteps. He started on Baritone and then moved onto Trombone where he stayed until called for National Service in 1955. After two years in the Army Dave came back to the City and British Legion Band and then variously played Trombone, Baritone, Horn, Euphonium and Bass Trombone, but mainly Trombone until the late 1960’s.
With their military style uniforms, the City and British Legion Band had many engagements both within the City and in London parks. During the 1950’s ‘doubles’ were often done in London Parks – one job in the afternoon and one in the evening. At that time every band that played in the parks had to audition at County Hall every January before the jobs were allocated, just to check the band still met the high standards of the time. The Band at this time still marched, and took part in many parades in the City, often along St Peters Street down to the Abbey. Every time there was a parade there was a man who turned up and marched in front, although he didn’t play an instrument. Strangely his name was also George Wright! The band used to play regularly on the band’s own ‘piece of concrete’ in Verulamium park – situated in a natural hollow hundreds of people used to sit and listen.
At the time Dave joined the band there were a number of members who had been in the band for many years – Joe Smith and Alf Martin had many years experience between them, whilst George Peck and Harry Johnson had joined the City band after the war from the British Legion band. Harry Johnson had played Clarinet in the British Legion band, and taught himself to play trombone for the City band. The long running joke was that his trombone playing sounded like someone playing the clarinet!
The band owed a lot to a selection of good MD’s in the post-war years. Ted Longland had taken over in 1945 when the band was revived after the war. His father, affectionately known as ‘Pop’ Longland had been in the City band since soon after the First World War. After Ted Longland stepped down in the late 1950’s another band member, Ernie Ewings conducted for a short time before a certain ‘Captain Kitson’ was appointed. Formerly the conductor of the Heath and Reach Band, Kitson was a strange chap who was always keen to point out the fact that he had been a commissioned officer in the Army, and made money from his Army musical background. However in practice his direction was less than satisfactory. After one particularly bad performance the unfortunate Kitson was pelted with an assortment of fruit and vegetables as a clear indication from the audience of his unsatisfactory musical direction! Shortly after this news reached the committee of some more information on Kitson – it happened that actually he had never been a commissioned officer in the Army, had never had any Army musical training and had in fact only ever been a Private in the Territorials. Needless to say, ‘Captain’ Kitson’s employment as MD of the City Band was swiftly terminated.
After this, Tommy Boyes was appointed MD, and in 1967 Nelson Morris took over. The standard of the band at this time was very good and the band won lots of contests. It was in 1969 when the band won the Second Section that things started to go downhill – an Extraordinary General Meeting was called and the proposal put to the band to not accept their promotion into the First Section, and instead stay in the Second Section. MD Nelson Morris was not keen on progressing any further and so, it seemed were many of the band and so it happened that St Albans City Band refused their promotion. At this point many of the good players, who wished to continue contesting began to drift away. At that time there were two excellent players who the band had moved down from the North of England, Dennis Ayton on Soprano and John Janes on Euphonium. The band had found them jobs in the area and they played with the band on the understanding that it was going places – especially the First Section. Both players moved on to Hendon Band after the decision was made to refuse the promotion – at that time Hendon Band took many players on from St Albans.
Once it was clear the band was not going into the First Section Dave Macdonald left and went on to play with a number of other bands, including Hemel Hempstead and Luton. His father, Archie stayed on with St Albans band until around about 1990, when he was well into his eighties. Dave meanwhile rejoined St Albans in mid-1999 when he was asked by the then MD Bill Rumford to play Baritone at the Fourth Section National Finals, which St Albans attended in 1999. Dave continued to play both Trombone and Baritone with the City band until he retired from playing in 2004.
Nick Doolan 6th June 2005.