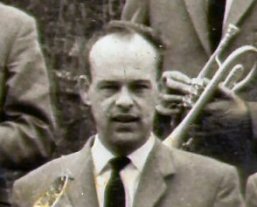 Richard Banks joined St Albans City and British Legion band in 1962 – his reason for joining was that he was in the RAF at RAF Stanmore and had been keen to get back into banding – he had been brought up in St Albans and had relatives in the city and often spent most weekends in the area. His original position in the band was on 2nd Cornet and he first sat next to Archie McDonald, father of Dave McDonald. By 1963 he was playing 1st Cornet, 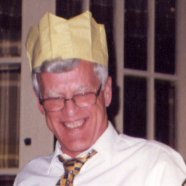 but by 1964 he went on to Horn where he stayed until leaving the band in November 1972 when he joined Hemel Hempstead Band. Another reason for his joining St Albans Band was the fact that he had distant family members in the band – Joe Smith, the longest serving member when he joined was in fact Richard Banks’ Mother’s Cousin. Joe Smith had been in the band since 1909 and had been one of the original trustees and signatories on the deeds of the Bandroom when it was purchased in 1926. His son, Les Smith was in the band when Richard joined and his Grandson, Ken Smith joined soon after Richard. Other long serving members included George Wright, George Peck, Len Smith and others. Tommy Boyes was Conductor whilst his son, Kenny Boyes was top man. Nelson Morris was second man down and Bandmaster, followed by George Peck on third man. Other players at that time included Alan Webster on Solo Euphonium, Dave McDonald on Solo Trombone, Les Smith on Eb Bass, Alan Carter on Horn, Bernard ‘Buddy’ Allen on Flugal, Bill Day on Bb Bass, Jimmy Johnson on Soprano. Later on players such as Charlie Wickenden (Eb Bass) and Dennis Ayton (Soprano) joined up. Dennis Ayton was a player who had come down from the North East and relocated down here along with another player, John Janes. Latterly they left the band to go and play with Hendon Band. Other notable players from the 1960’s / 70’s include Alan Vass, who was George Peck’s nephew and played cornet. He later left and joined Hemel Hempstead Band, and is now living in the Croydon area. Harold Oldham was a Soprano player and was band chairman in the mid-1970’s and again in the early 1980’s. Ian Davis was a euphonium player and band secretary in the mid-1970’s. He latterly played with Bedford Band.
The band at that time were a decent 2nd Section band and had a good record at local contests and reasonable results at the area. At that time the Area contest was sponsored by the Daily Herald and was organised by the old London and Home Counties Band Association. In 1969 the band won the 2nd section areas and went to the Nationals where they came a respectable 6th place in the 2nd section. However due to a number of players, and Nelson Morris the Conductor who did not want to accept the promotion to the 1st Section the band refused this honour, and thus stayed in the 2nd section – something that many players did not like – the band lost a lot of players over this decision.
The band instruments were a mix of mainly old and pretty worn out examples – it was this problem that promped the negotiation of a grant from St Albans District Council in 1967 for the purchase of a new set of instruments at around 4000 pounds plus the Hardy Aimes uniform jackets. The new set of instruments were of the low pitch variety – there was a great trend at that time for converting instruments from high to low pitch and so the new set of Boosey and Hawkes instruments were all low pitch. A few remnants of this set of instruments continued to be used in the band right up until around 2003.
The music that was played at that time was very traditional and consisted mainly of old transcriptions of overtures, operas, music from the shows and old marches – there was very little in the way of new pieces being written for brass band at that time. One of the first ‘modern’ pieces written for brass band in the 1960’s was ‘Bandology’ by Eric Osterling – a piece that was a favourite finisher for the band at this time and must have featured somewhere on the programme for the majority of concerts. Richard recalls how the band got thoroughly fed up with it by the end of a summer season!
The London Park jobs were an important part of the band’s portfolio at this time and it was not unusual to have at least one London park job every weekend through the height of the summer. Sometimes ‘doubles’ were done, where the band performed in one park for an afternoon and then onto another one for an evening concert. At that 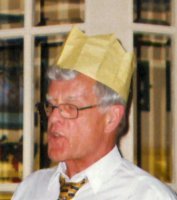 time the GLC organised and oversaw all the bands in the parks and they employed Frank Wright to go around the parks and check that everything was going smoothly, and more importantly, that the GLC got their money’s worth out of every band! If it was raining, the band was only allowed to go home if every listener had gone and the park was empty – even if there was one member of the public still in earshot the band had to play on! There was always a rule that the band had to take a minimum of 24 players to London park jobs, and players would be counted whilst on the bandstand playing to check this rule was adhered to. On a number of occasions a couple of wives and girlfriends had to don band jackets and sit on the bandstand during the performances pretending to play! At that time every band who wanted to apply to play in London parks had to go and audition at County Hall in front of Frank Wright, normally in about February in order to check that the band was still up to standard. Programmes for London park jobs had to be submitted one month in advance of the performance and changes were only allowed in very exceptional circumstances. Normally, the programme would be checked against the ones from the surrounding weeks just to make sure that there were no duplications of pieces – at least the audience knew they would hear something different every week! Generally the band played in North London parks including Golders Green, Parliament Hill, Clissold and others. These park jobs were well organised and were for many bands at that time a lifeline that kept them going financially and helped boost morale.
After Richard left in 1972 the band went through a number of years of uncertainty and although Richard followed the fortunes of the band he did not rejoin until early 1999. The band at this time was in a poor state, struggling at the bottom of the 4th section after having gone through a number of conductors and numerous players in a short space of time. Richard teamed up with his old colleague and friend Bill Rumford (who had previously been MD of the band back in 1993 – 94) and they devised a plan to pull the band out of the 4th section and back onto some sort of straight path. Bill Rumford took the MD’s job which had previously been occupied by Mark Jarvis. After a lot of work they managed to start seeing some results with a trip to the 4th section finals at Nottingham in 1999 followed by a success in the 3rd section in 2001. It was in this state that current MD Stuart Garman took over in November 2002.
Richard latterly played Solo Horn and then 3rd Cornet and retired from playing in early 2004.
We use cookies on our website to give you the most relevant experience by remembering your preferences and repeat visits. By clicking “Accept All”, you consent to the use of ALL the cookies. However, you may visit "Cookie Settings" to provide a controlled consent.
Cookie SettingsAccept All
Manage consent