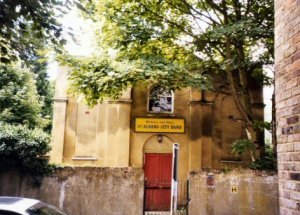 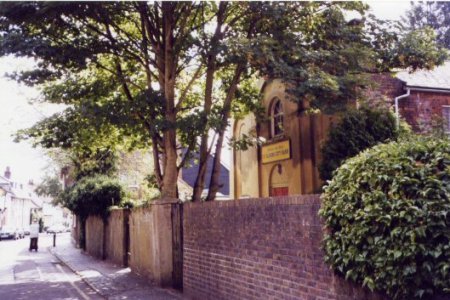 Purchased in 1934, the building was already dilapidated at the time and the band spent some time bringing it back up to standard. The original building is believed to date to around 1850 and is sited on Sopwell Lane, a lane consisting mainly of small cottages mostly dating from the 1800 – 1850 period, with some later infill. One might think that a bandroom in such a residential area would quickly attract complaints from the neighbours, but this was rarely the case in those early days. The first picture shows the bandroom in it’s leafy setting among the cottages of Sopwell Lane. For many years the tree to the front of the bandroom grew wildly out of control, and was cut down soon after these pictures were taken, on 30th August 2001. The purchase of a bandroom in such a central location back in 1926 was important – of course at that time probably 90% of the band lived in the city, and most would be within walking or cycling distance. For example, in the late 1930’s four members of the band lived in Longmire Road, not five minutes walk from Sopwell Lane. In the band of 2005, only three members still live in the city. 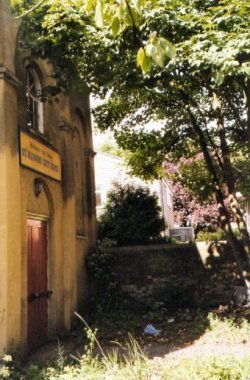 The frontage of the bandroom was convered in this rather unattractive concrete screeding which was added in the early 20th century, along with a wall to the front covered in the same material. Although the bandroom would have looked much better with the original brick, since the building is locally listed no significant adjustment can be made without a large amount of planning rigmarole. As the concrete screeding and wall was inplace when the building was listed it is deemed to have to stay!

The sign affixed to the front of the bandroom says ‘Webster and Days St Albans City Band’. This title dates from the late 1970’s when the band was sponsored for a number of years by Webster and Days Building Supplies of Radlett, a company that was owned by the Band Chairman and long time Euphonium player Alan Webster. It was during this time that the last major work was done to the bandroom in that it was re-roofed.

The frontage was always constantly full of leaves and branches from the tree, another reason why it was taken down. To finish it off, an area of rather scrubby grass and weeds finished off the entrance to the bandroom. 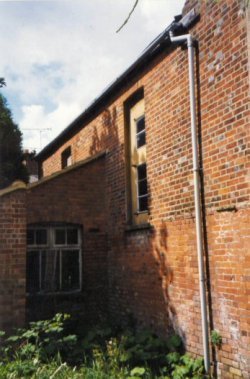 This side view of the bandroom shows the original brickwork and the circa.1900 extension which housed a kitchen area and two toilets. The plastic drainpipe is another legacy of Alan Webster’s time with the band. The poorly equipped roof drainage could probably be said to be one of the main reasons that the band eventually had to leave the old bandroom for pastures new. Water running down the walls over many years caused wet rot, rising damp and a number of other problems to occur, leading to the eventual partial collapse of the floor.

Behind the bandroom can be seen a newer cottage style dwelling, this land was originally part of the chapel and belonged to the band. It was sold for development after the war – the band retained a small piece of land immediately behind the rear wall of the bandroom, for which a peppercorn rent was charged for many years. 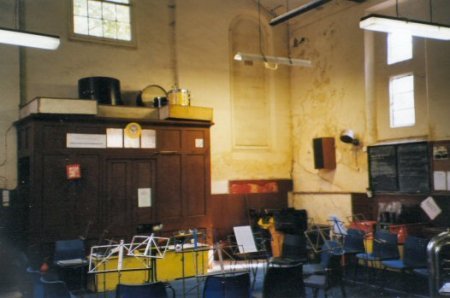 This first view of the interior shows a building unchanged for probably 50 years. The brown painted wood was all remains from the old chapel fittings and on either side, in the wall can be seen the holes in the walls where the pews were once fitted. It is also believed that underneath the floor there is a baptistry although this has yet to be proven. The blocked in windows were completed during World War Two, when precautions were taken against both bomb blasts and also the unwanted attention from drunks passing by who regularly hurled bottles, bricks and almost any other missile they could find at the large windows whilst the band was playing. Believe it or not, until the mid-60’s Sopwell Lane was a quite dilapidated area, and at that time the precautions were felt to be necessary. There are now plans afoot to convert this old bandroom into a dwelling, and it is hoped during that conversion the original large windows will be able to be reinstated. 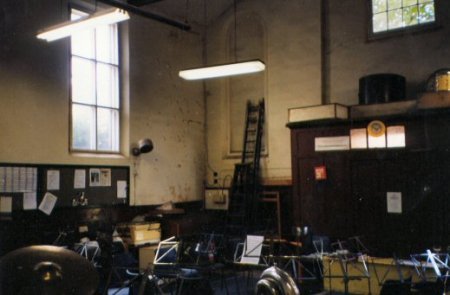 Sometime since the war flourescent lighting was installed in the bandroom. This gave some much needed lighting to the dingy interior which was certainly not helped by the blocking up of the windows. In recent years the bandroom did not see as much use as it once did – up until the 1970’s there was regularly three rehersals a week, on Wednesdays, Fridays and Sundays. Once the band started to go downhill at this time the rehersals were cut back to just a Wednesday night, where it remains at the present. Since 2000 the bandroom in Sopwell Lane began to deteriorate rapidly. Problems with the roof and guttering / drainage meant that by January 2003 the building was becoming unusable. It was at this point the decision was taken to move out to another rehersal venue at Bernards Heath Junior School and start serious negotiations to sell the old bandroom, an idea that had been suggested as far back as 1979. On 15th March 2007 the building finally sold and is now to be converted to a house. 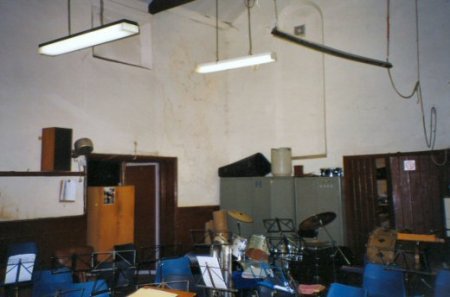