I came from Cornwall originally, starting out with the Saltash Town band – 4th section, but was quite keen so would often play with many other local ones when I could  – Liskeard, and Tavistock (both 4th section), Plymouth Silver (1st/2nd), St Pinnock (2nd), and Bodmin Town Band (1st). Then I moved to the Midlands where I played with the Hathern Band (3rd) and Ratby Band (1st), before coming to St Albans. I always wanted to go on to one of the top bands, but eventually different priorities meant I couldn’t dedicate to the amount of continued practice necessary. Shortage of time has resulted in me having to stop banding altogether, which is a shame, but I still try and follow what is going on.

I used to live in lodgings where it was not possible to practice properly, so I held a key to the Sopwell Lane band room and used to pop in there at lunchtimes and evenings to keep in trim. I loved the excessive reverberance of the place, it made the band all sound better than we probably were! 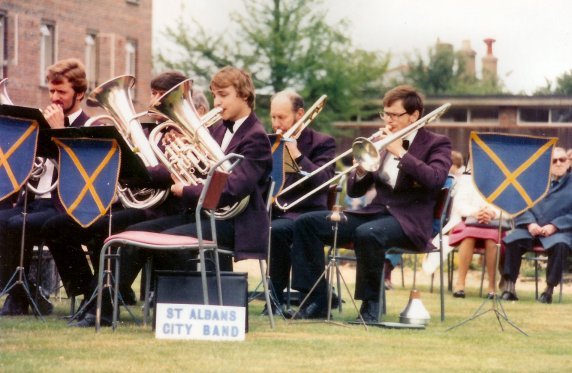 The Conductor when I joined was Matt Robertson who was a little Scots guy, with false teeth (he kept dislodging them during practice). A larger than life person – totally dedicated to banding. I understand he was a pretty good Euphonium player in his time, I learned an awful lot from him particularly with regard to tone production. He’d taken a chap called Anthony ? under his wing as a Euphonium player and I think was quite upset when he left (Anthony’s wife stayed on as second Trombone player for a while). A chap called Steve took his (Anthony’s) place and came on leaps and bounds under Matt’s direction.

Matt was a lovely chap but very forthright, and outspoken, and not afraid to say when something was poor, he upset a few people, because if someone from the back row would improve, he would have no hesitation in moving them forward, possibly displacing someone on the front row. He desperately tried (quite successfully) to raise the standard of the band, and as a player you had to understand that this was his mission – not to make friends particularly – you had to be the type not to take offence when he had a go at you. He brought out a lot of the very old music, and stuff that wasn’t played very often which was interesting…also quite refreshing, and got quite a good reception, and positive comment from the judges when going in for an entertainment contest. (With regard to contesting – we were always pretty close to the top of the Third section, despite not winning whilst I was there).

I went with Matt to the National Finals one year at the Albert Hall – (“Blitz” was the test piece) – he didn’t spend a lot of time in the concert hall, being quite difficult to keep up with rushing around chatting to his old friends – he seemed to know everyone – the principals in all the top bands and the Adjudicators. He introduced me to Tom Paulin (Grimethorpe) and, when I managed to catch up with him, Major Peter Parkes, John Clough, and many others who were part of his circle. I remember that his wife would get quite frustrated with him on concert day, as he would just disappear.

Matt would sometimes turn up on practice night with one of his virtuoso player friends – coming for a blow. I particularly remember a trombone player once who completely put me to shame. He was a jazz player, and we had a go at “South Rampart Street Parade” and the guy completely took over – amazing (he certainly didn’t follow the score – very Don Lusher)!

The Euphonium player was Anthony ? His wife (I am terrible for names it appears) played 2nd trombone. When he left, she stayed on for quite a while. She was playing first trombone when I arrived, until Matt, true to form, unceremoniously swapped us over!! She was ok about it, quite relieved in reality I think.  She was pretty good, but I think I was a lot louder! Anthony and his wife were married within about 2 weeks of me appearing on the scene, I’d only turned up to about 2 practices and they invited me to their wedding and reception – with a lot of the rest of the Band. It was very gracious of them, and made me feel very welcome. It was a nice way to get to know other members as well.

I was principal trombone player – and at the moment I am struggling for names. I can remember Len Smith very well. Roy Hall was principal cornet player, his daughter was a learner baritone player, Geoff….? was the flugal horn player who together with Anthony….? (euphonium) left to join the Hitchin Band (1982-ish). Howard Oldham was the soprano cornet player. Bridgette McClean was on back row cornet. Alan Webster wasn’t there when I was, I knew of him, and think I met him, he no doubt came for a blow on occasions, but I understand that he was busy with his business at the time. We weren’t officially sponsored by Webster and Day’s when I was there, although he would help out financially with uniforms and instruments I think.

We did the regular London park run, Battersea, Alexandra Palace, Golders Green etc, plus contests in Brighton, Milton Keynes, and Watford I think but the memory is a bit fuzzy. I do remember some work I did with Ken Smith. He and I had a meeting with the local British Legion at one time to explore ways of strengthening links between our two organisations…it didn’t really come to anything – perhaps a concert or two (at one of which our Bass Trombone player inadvertently pulled his slide off during the final part of “Hootenanny”  – the bit where we trombones stand up – how we laughed – and found it quite difficult to continue).

I note that your web site infers that the 70’s and 80’s were a bad patch for the band – my recollection was that it was no worse than any other band in the Third Section. We were having 2 practices per week during the time I was there, Monday and Thursday I think and every night leading up to a contest.

I liked the contesting and concert side of banding, but I wasn’t really into the ‘playing in the park’ or carnivals aspect. I like concerts best – when played inside so as to get a feel of the power of a band, but I do get a buzz when a band plays a good tune well. A “challenge” to the listener is ok if it is in a contest when you can hear it over and over again, and get to know it, but unless the listener actually know the piece first then it can be dull in a concert setting.

‘Playing in the park’ I feel never does a band justice, and more often than not has to rely on some stand-in players, because of the weekend commitments of regulars. I think I was traumatised in my early playing years when my then band (Saltash – 4th section) had a load of stand-ins  – including the conductor (from Bodmin band – top section) – a guy called Alan Jenkin (who got them into the finals, and onto the TV programme Best of Brass in about 1980….) – he picked something for us to play at some fete, which should have been routine (typically “Y Viva Espania” or something of that ilk) but which we made a complete pigs ear of……….terribly embarrassing for all concerned……his face was a picture….he couldn’t believe what was happening to him!

I have come across 2 photos of the band playing in 1982 in St Albans College with Matt Robertson. 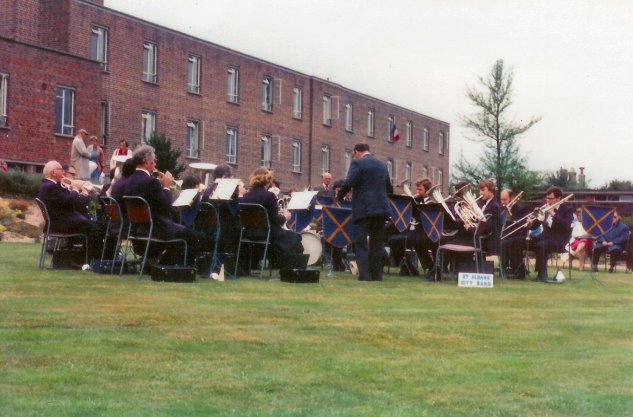 You can see Steve on principal Euphonium, with a chap called Ken I think on No.2. I recall that he was normally a tenor horn player – filling in on Euphonium. You can see the back of Harold Oldham’s, and Roy Hall’s head – (Roy is sitting as No.2 principal cornet, but would have still been playing the principal parts). I think you can see Len Smith on the far left of the full band picture, just to the right of the man with the grey hair…I can’t believe how difficult it is to remember the names. Bridget McClean (a real band enthusiast) is sitting next to Harold. I think the tenor horn player is called Richard, and Len is no doubt on the Bb bass! I am on the principal Trombone seat –  I look a lot younger there!! (the photo was taken by some of my friends that is why it is more focussed on the trombones….trying to embarrass me no doubt! – trombone No.2 is someone who joined us from Harpenden band after Anthony’s wife left. There is a bass trombonist (you can just see his hair) but again I can’t remember his name!

* Note from Nick Doolan* – Archie McDonald is on the far left playing cornet. I can’t place anyone else at present but I am sure some more names will be given in due course!
We use cookies on our website to give you the most relevant experience by remembering your preferences and repeat visits. By clicking “Accept All”, you consent to the use of ALL the cookies. However, you may visit "Cookie Settings" to provide a controlled consent.
Cookie SettingsAccept All
Manage consent