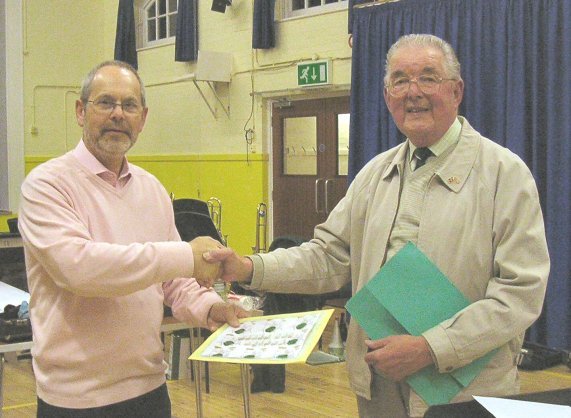 April 26th was the day we said farewell to a stalwart of the percussion section, Graham Hart who had been a familiar sight at the back of the band for at least fifteen years!

An entirely self taught player, Graham had been involved in the local banding scene for over thirty years having played with Welwyn Garden City and Stevenage bands among many others. He originally started playing whilst in the ATC and after a number of years without music in his life he joined Welwyn Garden City Band whilst his youngest son was playing there. Graham’s dedication to banding, and especially to St Albans Band is something that we can all learn from. Rarely was he absent from the percussion section, and like several other players in the band had travelled with the band up the brass band rankings from the Fourth Section in the late 1990’s to today’s position in the First Section. His good humour and willingness to cart a carful of percussion kit around is something that we will always remember about Graham.

band at a special presentation at the evening’s rehearsal. Although Graham is determined to enjoy his retirement, he has not ruled out doing a bit of playing here and there!

In Graham’s place we are pleased to welcome Lynne Bailey and Erin Loudon who join us on Percussion from London based band Capital Concert Brass.