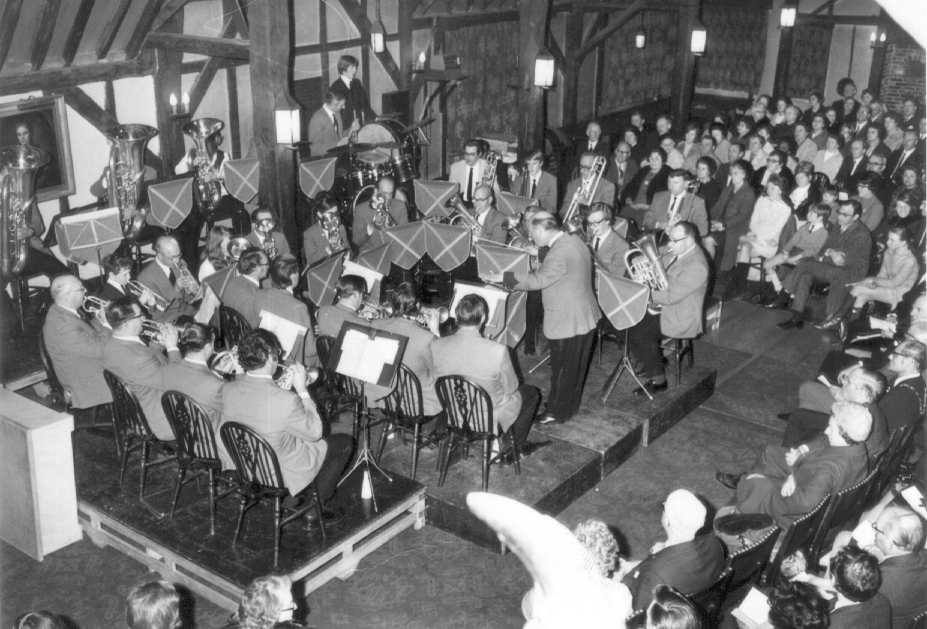 We were delighted to hear from Shaun Major, who was the youngest member of the band in the late 1960s. He also sent these two great photos, taken at the Civic Centre and Waterend Barn (both 1967). Shaun is identifiable as the only player in the Waterend photo not wearing a band jacket. Here are some of his memories:

“I played 3rd/4th cornet. My father knew Len smith (double bass) and Nelson Morris and since I had taken a cornet apart at school and made a noise with it I ended up there on a Wednesday night – terrified.

“Played all over London parks, at St Albans Cvic Centre with the band and Royal Marines and George Chisholm. There was a 2nd uniform: dark blue I think and a Blue hat. We wore this when marching through the town centre.

“I also remember the man John Irving – he was carrying a new tenor horn as we walked in those uniforms along Sopwell Lane. He said “I cant do much right but I can make a good cup of tea” and with that he tripped, fell on the horn and dented the bell flare. Nelson [the band leader] was quiet but annoyed.

“Nelson impressed on everyone how important it was that each and every time that when that baton dropped to its low point – everyone came in at that exact moment.

If I recall, as the required 25th member of the band I was required to be there at the London parks so the band was paid and I was able to bring the new council paid Besson frosted silver plate cornet to school. Clapham common, and Peckham Rye, Golders Green – something like for concerts on a Saturday and a Sunday.

“I blew my chance of playing in the competition because having acquired more courage I was playing louder but I got my up beats mixed up with the down beats  on the ending of the test piece which the band found hilarious but it mean’t that I could not play but only watch the auditions at Hammersmith.

“I also remember the lady named Barbara, a man who used to sit next to her that could throw his voice so you never knew where the jokes were coming from, the happy go lucky drummer, and the man who came into rehearsal one day having had either a hair transplant or a wig or something which was so unusual at the time and effective that the whole band couldn’t get over it – made him look 10 years younger!“